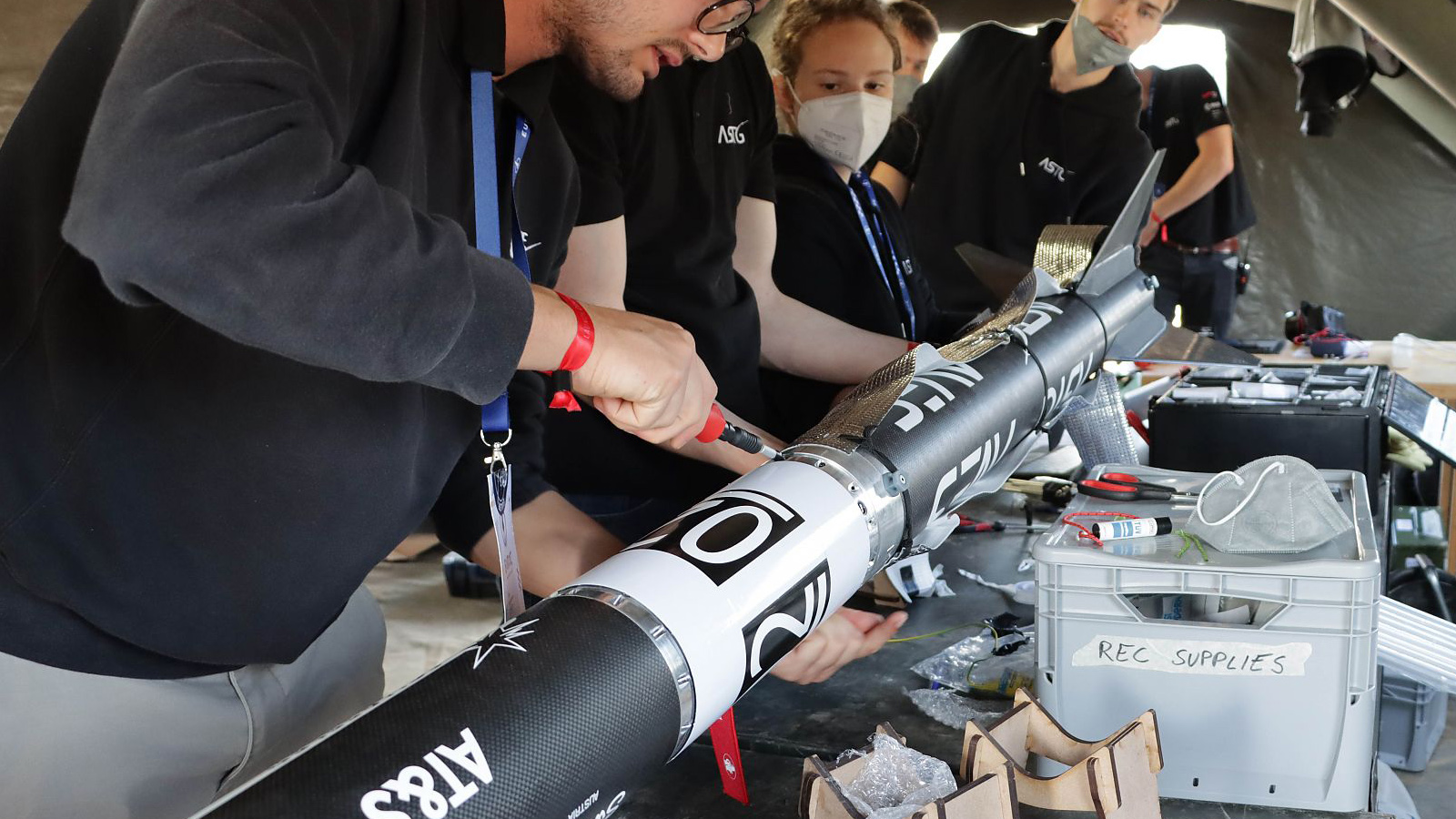 Rocket from Austria: Students reaching for the stars

In the Aerospace Team Graz (ASTG), students build rockets with which they take part in international competitions. With the current model “AVES 2”, the Graz team will participate in the European Rocketry Challenge in Portugal in October. AT&S contributes to the project with a printed circuit board package enabling electronic controls.

Austria is not particularly known for rocket science. However, a team of students from Graz universities and technical colleges caused a stir internationally. The ASTG, founded in 2019, was able to win a prize at the European Rocketry Challenge (EuRoC) 2021 with its “AVES 1” rocket the first time it competed: the young rocket builders received the “Technical Award,” awarded for the best technical documentation. “In addition, the AVES was the fastest accelerating rocket in the competition,” says ASTG President Stefan Weiss. The Graz team will try to repeat this success in October with the successor rocket “AVES 2”.

The AVES 2 planned and constructed by the ASTG is three and a half meters long and weighs 33 kilograms. At the EuRoC, the rocket will try to reach a flight altitude of three kilometers as precisely as possible. A so-called solid-fuel booster is used as the drive, in which the fuel and oxidizing agent are mixed and present in a solid form. After the engine has burned out and the rocket has accelerated to the target speed of around 1100 km/h, the altitude is fine-tuned by deploying “airbrakes,” which increase drag and thus slow the rocket down. It returns to the ground through a system of two parachutes that allow a safe landing and the reuse of the rocket’s casing.

In addition to propulsion, airbrakes, and parachute technology, the rocket has space for six cameras and a cargo area loaded with four kilograms of mass for the competition. In addition, of course, the rocket needs control and communication systems. It’s a lot of work for the students, especially since they’re also working on a test stand, a launch pad, and a new hybrid engine that will power future rockets with separate supplies of paraffin and nitrous oxide.

The ASTG uses 3D printers, its own operating system, and all the resources available to them at their universities to be able to complete as many of the construction work steps as possible themselves. In some areas, however, they still depend on the help of companies with particular expertise in their field. “Austria is not a classic space nation, but it has a strong high-tech sector, and some companies are suppliers of satellites,” says Weiss.

The microelectronics, which form the brain of the rocket, are supplied by the Styrian circuit board manufacturer AT&S, and light and durable composite materials come from the Upper Austrian company Peak Technology. “We are proud to support these young talents with our proven space-ready high-tech printed circuit boards and hope that our contribution will help to improve the rocket further,” says Harald Gall, Director of Business Line Automotive at AT&S.

ISI in Vienna manufactures the unique argon capsules required to deploy the parachutes. Several companies from the Graz area are involved in producing the aluminum parts, and Diamond Aircraft Systems from Wiener Neustadt is providing the materials. Numerous other industrial partners provide software, infrastructure, or financial resources to support the rocket builders. Construction is progressing well, with a first test flight of the AVES 2 rocket scheduled for August. The ASTG and the companies involved are in good spirits to be able to repeat last year’s success at the EuRoC in October. They are already working diligently on improvements for future models.