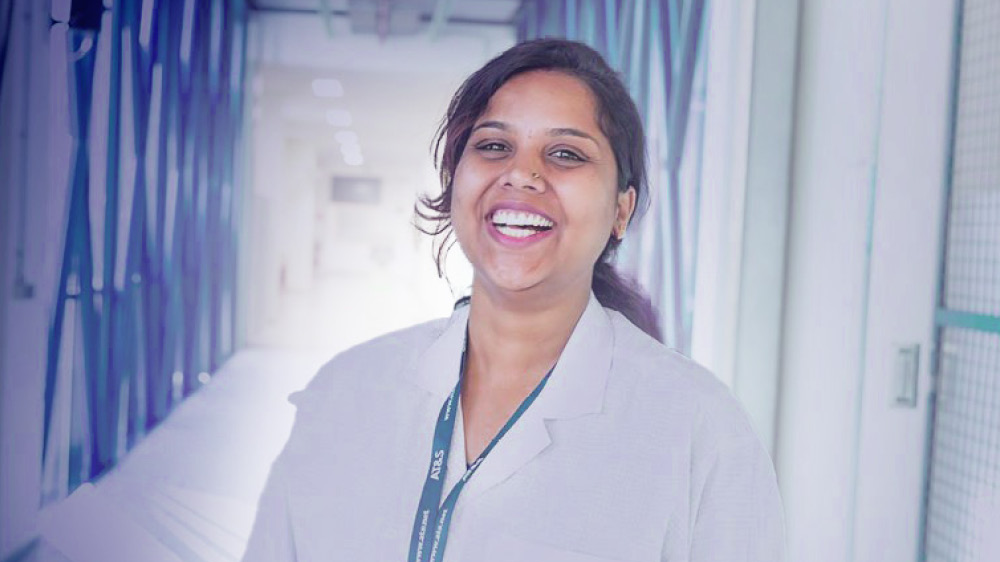 AT&S owes its success to high-tech and, above all, to the committed employees worldwide. Our category “The people behind AT&S” presents these inspiring colleagues.

Pooja V discovered early on that she enjoys dealing with people. In the extended family she grew up with, she had many opportunities to train her social skills. A bright child who got good grades in school, she later successfully earned several university degrees. Her charm and intelligence predestined her for the HR department at AT&S, where she currently works as a senior officer.

Pooja V hails from the city of Mysuru in the southern Indian state of Karnataka. Her father’s work as a lab technician allowed her mother to stay at home and care for Pooja and her brother. “I only have one brother, but we’ve always been part of a big family. I soon learned in school that I didn’t particularly like numbers. I’ve always preferred people, and I enjoy understanding their psychological motivations. Maybe that has to do with our upbringing because my brother has also ended up in a profession that requires solid social skills: he works as a nurse in the UK,” says Pooja.

Both children did well in school, and Pooja got into the Teresian College of Business Management after high school. She graduated with a bachelor’s degree in business management. After discovering her thirst for knowledge, she began a second degree at the University of Mysore, where she graduated in 2014 with an MBA.

She has since added a third degree to her impressive educational pedigree with a Bachelor of Laws degree. After a few management jobs in the textile industry, Pooja found out about an open position at AT&S through her professional network and took the opportunity to apply.

“As a high-tech company, AT&S is held in high esteem by local university graduates. I was thrilled to have the opportunity to work in a multinational company, where I could learn about international human resources and contribute to the company’s success. It’s been five years, and I still enjoy working at a company with a multicultural workforce and advanced technology,” says Pooja.

Work-life-balance, and balancing on horseback for fun: Pooja V

In addition to her academic and professional successes, she always had time for a fulfilling private life. She has been married to a professional photographer for ten years. They are starting their own family together. Pooja enjoys cooking, swimming, and horseback riding in her free time.

With her work at AT&S, she can reconcile all of that. “AT&S offers flexible working hours, working from home or shift models, especially for women and parents, which make it possible to combine private and professional life in the best possible way,” says Pooja. At work, she is responsible for recruiting, smooth onboarding of new employees, and day-to-day relations with unions.

“I really like this job, but I also want to keep growing and become an independent HR manager in the next five years.” With her impressive skills, integrity, and attitude of never giving up, she is sure to achieve her goals, arguably sooner rather than later.