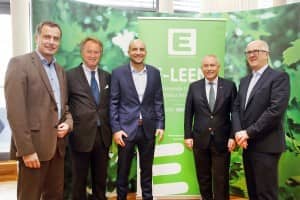 Together with nine large industrial enterprises, Styrian energy provider Energie Steiermark is starting a new network, which is intended to reduce the companies’ energy consumption by up to 3% annually. LEEN (Learning Energy Efficiency Network) will run for four years and is based on targeted collaboration between the participants. At regular meetings and specialist presentations, the companies will learn from one another in order to use their individual savings potential even better, for example in the areas of compressed air, cogeneration, and electric drives.

One of the participants in the LEEN Network is the Styrian high-end printed circuit board producer AT&S. AT&S COO Heinz Moitzi is convinced of the purpose of this network and considers it a crucial lever to reduce energy consumption at AT&S even further: “For a globally producing industrial enterprise like AT&S, the reduction of energy consumption is of enormous economic and ecological importance. Based on our mission ‘We reduce our ecological footprint’ we have set ourselves ambitious reduction goals for CO2 and fresh water consumption and have already accomplished some significant savings. However, we are currently reaching our limits. Therefore, we welcome the LEEN initiative, which was launched by Energie Steiermark. With the LEEN Network we expect further significant savings potential that supports our reduction targets. Mutual networking with the participating companies, the exchange of experience and the professional support by LEEN are very valuable in this process.”

The network is supported by LEEN GmbH in Karlsruhe, which already manages more than 30 similar networks in Germany and has implemented a total of far more than 4000 individual energy efficiency measures.