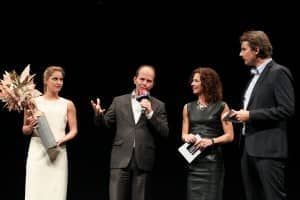 The futurezone Awards 2015 were presented yesterday during a large gala event at Vienna’s Museumsquartier. As in the past, AT&S was one of the main cooperation partners of the event again this year.

“Each year, the most innovative ideas and the best technology products of the year are awarded at the futurezone Awards. That goes perfectly with our vision and mission. For us at AT&S, this event is an excellent opportunity to position ourselves among a community with an affinity for technology and to enhance the general public’s perception of us”, AT&S CEO Andreas Gerstenmayer explains the collaboration.

The winners of the 16 different futurezone Award categories were presented with a glass trophy in printed circuit board (PCB) design sponsored by AT&S. For the first time, an audience prize was awarded this year by live voting. The start-up Kiweno, which was chosen by the audience, was pleased to receive a very special award: Andreas Gerstenmayer presented a bouquet of flowers made of AT&S PCBs to Kiweno founder Bianca Gfrei, 25, from Tyrol. Kiweno offers low-cost self-tests for food intolerances and convinced both the panel of experts and the audience with their product.

And this is how the nomination process works:

From all entries, the panel of futurezone experts chose six finalists per category. Then the readers of ‘futurezone’ and ‘Kurier’ as well as a 37-person panel of specialist consisting of sponsors and technology experts voted in these categories. The top three of each category were invited to yesterday’s gala, where the winners were finally announced.