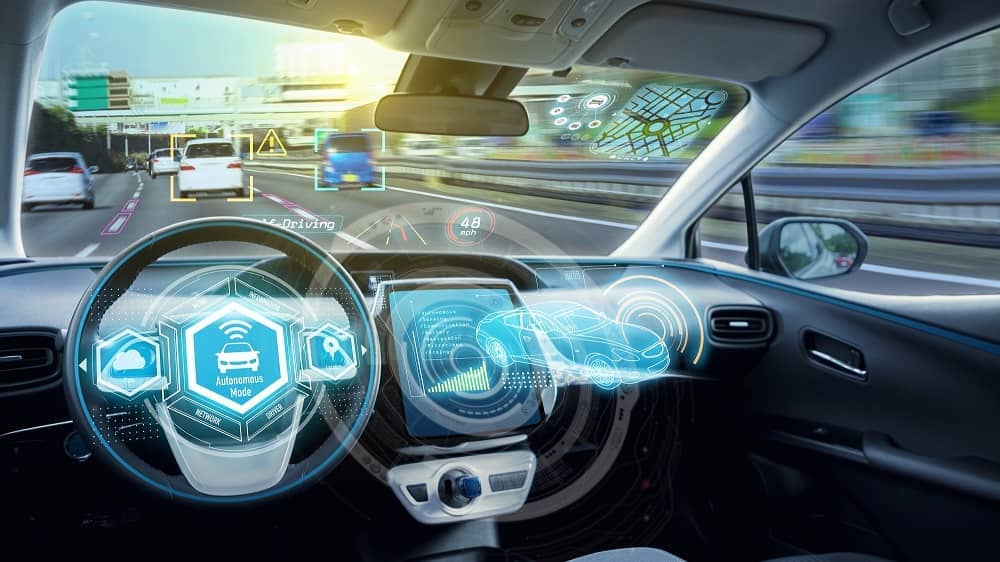 When artificial intelligence drives the car

How artificial intelligence enables the future of mobility

Even though some cars can already drive by themselves – it will still take many years until vehicles will even come close to having human capabilities. The great challenge of self-driving cars is to identify complex traffic situations and make decisions in milliseconds. Humans decide intuitively and/or based on experience while “a car still has to learn such situations, and artificial intelligence (AI) helps in this process,” says AT&S expert Harald Gall, responsible for Business Development Automotive.

When talking about AI in cars, it is usually equated with self-driving cars since AI is in fact primarily used in this sector. “AI is and will be as good as the input it is fed,” says Gall. And the input consists of diverse complex traffic situations, live data collected by radar, camera and laser sensors or derived from the infrastructure (traffic lights, road markings).

GPS information as well as the signals of other road users, from smart cars to smartphone users, are incorporated into the system. “AI draws conclusions from all of this information, makes decisions and keeps learning continuously.” If a situation occurs that is already stored in the system, AI knows what to do and how the car has to react. If the situation is new, it will calculate the case most likely to occur based on all existing data.

In general, autonomous driving is classified according to different levels of automation. At Level 0, the driver performs all tasks; Level 1 includes functions like cruise control, while at Level 2 there are assistance systems such as lane centering or automatic braking. Starting at Level 3, the driver is assisted and certain functions such as lane changes including indicating or lane centering are automatically done by the system, which is technically feasible on highways. If a problem occurs, the system tells the driver to take control.

Level 4 is a highly automated system which drives the vehicle autonomously on all roads, but notifies the driver if intervention is necessary. At Level 5, the highest autonomy level, no driver is necessary. The vehicle can do without a steering wheel and pedals and drives autonomously, as shown by trials of Google’s Waymo fleet in the San Francisco area, self-driving Volvo busses in Singapore or Navya in Vienna.

Practically every car manufacturer and many high-tech companies are working on this self-driving future – Google founded Waymo and closely cooperated with Toyota for its self-driving car program over the past ten years, while self-driving functions are equally integrated in Tesla as in BMW, Mercedes-Benz or Audi. At Audi, which collaborates with several partners such as the chip manufacturer Nvidia, AI is created in a central control device called ZFAS (central driver assistance controller).

It was developed by Audi and the Viennese software company TTTech. ZFAS records the data flows of all sensor data – it can detect nearly 40 functions – and merges them in order to realize functions for automated driving such as lane centering, distance control, parking, birds-eye view, etc.

The artificial intelligence chip for mobility

While Nvidia specializes in graphics processors and chip sets for computers and gaming consoles, the British start-up Graphcore, established in 2016, aims to become one of the globally leading suppliers of AI chips. Graphcore fully concentrates on artificial intelligence in vehicles and has developed an AI processor (Intelligent Processing Unit/IPU). Shareholders in the company – which is worth nearly 2 billion dollars by now – include Microsoft, BMW and Bosch, among others.

The Intelligent Processing Unit (IPU) is a processor which offers ten to 100 times more computing power than current systems and is intended to become the brain of every smart car in the future – and these cars are expected to reach the mass market in ten years at the latest.

Miniaturization is the key to success

From autonomous driving and technologies for hybrid or fully electric drives to energy management in conventional cars or the latest headlight technologies – in the mobility sector the focus is on efficiency enhancement and the delivery of high-quality, reliable products. Miniaturization is a key aspect here as many innovations only become possible through miniaturization. “The implementation of electro-mobility requires previously unknown connectivity in automobiles,“ says AT&S expert Harald Gall, „and here powerful, space-saving and reliable interconnect solutions are required, which we have developed alone or in cooperation with partners.”

Because when devices, sensors and modules become smaller, more of them can be integrated or – what is important in electric cars – weight can be reduced, which in turn has a positive impact on range. At any rate, innovations in interconnect technology will be in even greater demand in the future. According to the Center for Solar Energy and Hydrogen Research (ZSW), the number of electric cars rose by 64 percent from 3.4 million in 2018 to 5.6 million in 2019. According to a forecast by Boston Consulting Group, every other car will be electric by 2030 (this figure also includes hybrid models). We are only just at the beginning of the e-mobility boom.