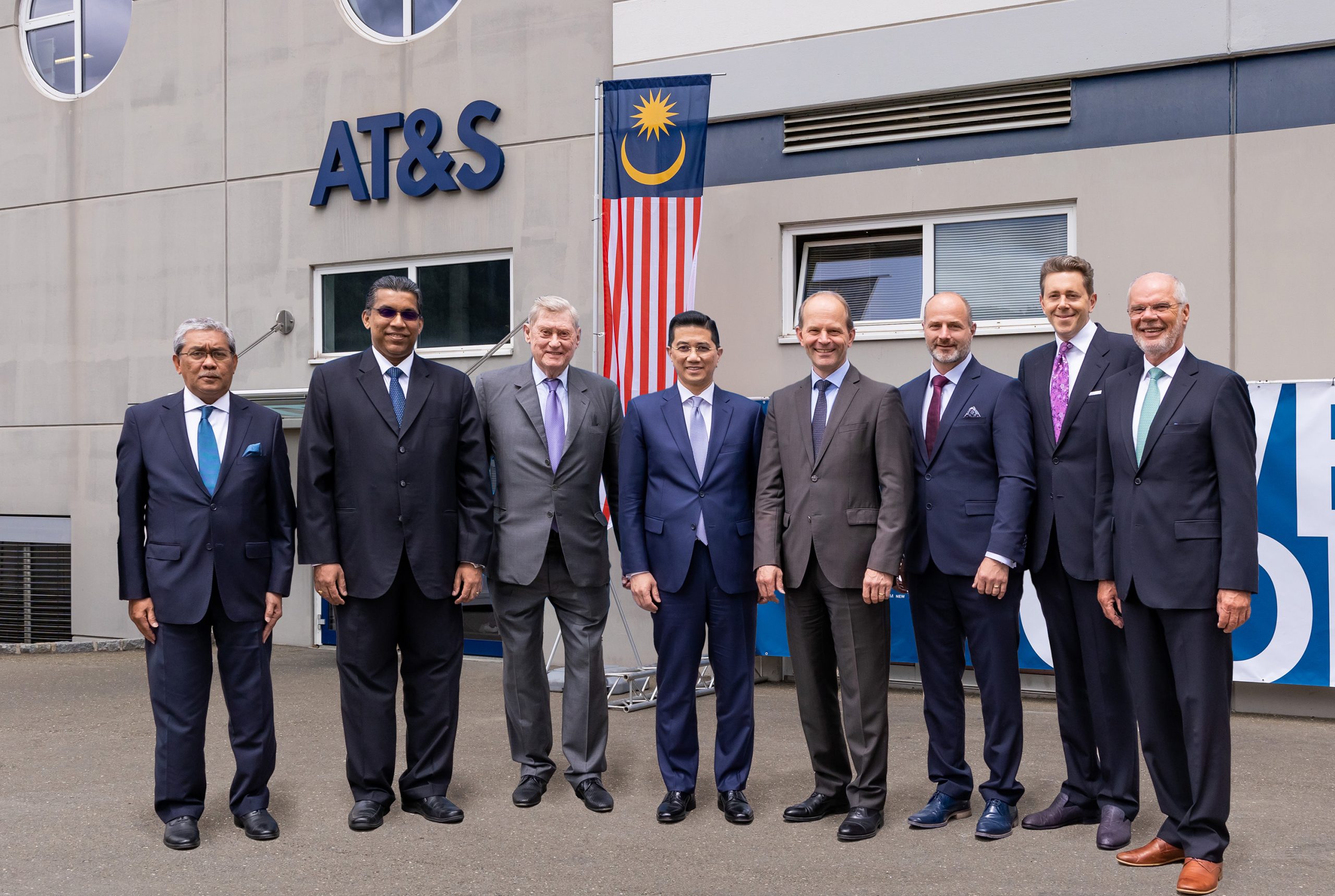 Leoben, July 12, 2021 – Innovative strength, technology leadership, and solution orientation have made AT&S one of the world’s largest and most successful suppliers of advanced interconnect technologies. With its current expansion step – a new plant for IC substrates – AT&S is expanding its geographical footprint and will be represented in Malaysia in the future. During a visit to AT&S’s Group headquarters in Leoben Hinterberg, a delegation from the Malaysian Senior Minister of Economy and Industry, Dato’ Seri Mohamed Azmin Ali, was able to see for themselves AT&S’s innovative strength and to discuss further cooperation steps and future projects with the Management Board team. Also present at the meeting were Hannes Androsch, Chairman of the AT&S Supervisory Board, Willi Dörflinger, Honorary Member of the Supervisory Board, Horst Bischof, Vice-Rector Graz University of Technology, the Malaysian Ambassador Dato’ Ganeson Sivagurunathan, and the CEO of The Malaysian Investment Development Authority (MIDA) Mr. Arham Abdul Rahman. The Austrian Federal Economic Chamber was represented by President Harald Mahrer; the Chamber was an important partner for AT&S in the global scouting for the location decision for the new plant.

Senior Minister Dato’ Seri Mohamed Azmin Ali visited the company’s headquarters in Leoben because AT&S announced a month ago that it will build its first production facility in Southeast Asia in Malaysia. AT&S’s new plant will be located in Kulim Hi-Tech Park, in the state of Kedah, and will produce high-end printed circuit boards and IC substrates. The total investment is 1.7 billion euros and 5,000 high-tech jobs will be created. On the occasion of the meeting, a university research cooperation between AT&S, Graz Technical University, and Malaysian universities was also agreed and a Memorandum of Understanding was signed.

“We are focusing on a plant that will bring the latest generation of high-end technologies to the country and that will establish a whole new technology sector,” says AT&S CEO Andreas Gerstenmayer. Since, in addition to the manufacture of high-tech products, a considerable amount of R&D activities will also be carried out at this new site, strong emphasis will also be placed on university collaborations. “We are convinced of the potential and capabilities of Malaysian scientists and students and want to deepen cooperation. Malaysia can benefit from its position as a technology country and strengthen the region as a high-tech production center in Asia.”

Dato‘ Seri Mohamed Azmin Ali said “AT&S investment in Malaysia is indeed timely especially during the Covid-19 pandemic. It is a testament to the confidence of foreign investors in Malaysia’s economic prospects as well as the recognition of our well-established Electrical and Electronics (E&E) industry’s ecosystem. The presence of AT&S in Malaysia will further strengthen Malaysia’s position in the E&E sector as a key driver of Malaysia’s industrial development”. He added “MIDA will continue to work closely with AT&S in realizing the project in Malaysia. The MoU signing will expand the mutual relationship. The signing will develop long-term research & development partnerships and capacity development collaborations between AT&S and Malaysian Universities, Education, Training, and Research Institutions. This will work towards technology transfer that will positively contribute to high-tech employment in the country”.

“If we had not focused on internationalization, AT&S would no longer exist in Austria and we would not have risen to become a global leader in the microelectronics industry,” says Hannes Androsch, Chairman of the AT&S Supervisory Board. “The new plant in Malaysia will not only extend our road to success, but will secure our sites, including the headquarters in Leoben, and lead to expansion and a huge increase in the number of employees.”

Harald Mahrer, President Austrian Federal Economic Chamber, adds: „We are proud that ADVANTAGE AUSTRIA, the Internationalization, and Innovation Agency of the Austrian Federal Economic Chamber could support AT&S in reaching this important milestone of their company history. Our offices abroad demonstrated that ‘Worldwide Business Support’ is truly what they stand for. They did establish contacts to the most important stakeholders in the industry as well as high-ranking political decision-makers to allow AT&S to take full advantage of the well-established network of the Austrian Federal Economic Chamber abroad. This expansion does not only secure the international competitiveness of our industry as well as employment domestically but also generally benefits Austria as a business location.”

With the construction of the new plant in Malaysia, AT&S is making the biggest investment in the company’s history and will be one of the top global players in high-end IC substrates when fully completed. Malaysia is expected to take an important step towards global market leadership in microelectronics. In parallel with the development of the production site, AT&S will work with the Malaysian Investment Development Authority (MIDA) to identify the leading universities in Malaysia and evaluate opportunities for cooperation. The Graz University of Technology has expressed great interest in participating in this cooperation.