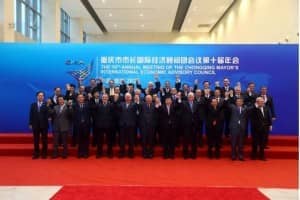 Chongqing is not only considered the largest city in the world but plays a significant role in the State project “One Belt One Road”, connecting the Yangtse river belt from Shanghai with the silk route across Central Asia to Western Europe. The Chongqing Mayor Huang Qifan has therefore established an international Economic Advisory Council, consisting of 35 Global Chairmen of Fortune Top 500 companies which get together annually – this time from Sept. 19 – 20, 2015.

AT&S Supervisory Board Chairman Dr. Hannes Androsch was appointed as one of six new members to the Chongqing Mayor’s International Economic Advisory Council and received the credential from the Mayor. His advisory mandate is based on his longstanding expertise as industrial entrepreneur and former finance minister position.

The two day‘s meeting attracted around 400 worldwide business executives and top Chongqing officials participated. It reveals an exciting era and the importance of Chongqing with the State’s focus on “one road and one belt” strategy, the next growth engine the Chinese government is pushing to link up 65 countries with 4 billion populations.

Dr. Androsch was part of the panel discussion themed with “Yangtze River Economic Zone strategy drivers the transformation of Chongqing Economy”. He discussed in depth the challenges and opportunities for the future development of Chongqing from an investors perspective and pointed out Chongqing’s huge advantages and how AT&S, largest Austrian investor in China, benefits from these advantages in Chongqing with its new investment of EUR 480 million. .

From Dr. Androsch’s presentation, he sees great possibilities for Chongqing to further enhance infrastructure development in areas like finance, transportation, etc. A whole new industrial base, such as electronics or semiconductors can be developed on these service industries. And, Chongqing’s existing manufacturing businesses will become more competitive as they exploit the infrastructure benefits of these upgraded service industries. He also underlined that how vital is for Chongqing to continuously attract direct investment by leading high-tech enterprises worldwide and invest in talents.

AT&S, one of the globally leading manufacturers of high-end HDI printed circuit boards (PCBs), has been investing continuously in high-technology and innovation in China over the past 14 years. Since the beginning of its Chongqing plant constructions in 2011, AT&S is committed to sustainable development in Chongqing. The setup of the Chongqing plant is proceeding according to plan. The ramp-up of the IC substrate plant (plant 1) is scheduled for beginning of calendar year 2016. The start of production of substrate-like PCBs (plant 2) is expected for the second half of the calendar year 2016. By mid-2017, the planned investment volume in Chongqing will reach some EUR 480 million. AT&S will pursue its growth plans in Chongqing, consolidate its industrial leadership, and contribute to the economic development of Chongqing and Western China.