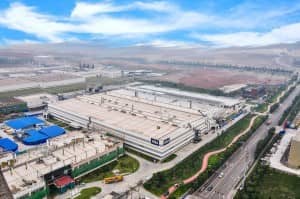 AT&S, one of the global technology leaders for high-end printed circuit boards (PCBs), received the certification for its new plant in Chongqing, China, after roughly 17 months of comprehensive development for the serial production of IC substrates. As a result, serial production will start for the first of two production lines. AT&S will manufacture IC substrates, so-called Flip Chip Ball Grid Array substrates for the use in microprocessors.

Andreas Gerstenmayer, CEO of AT&S, says: “The certification is a milestone for us. In record time, we have established a complex production site and provided a highly sophisticated technology, which was completely new to us, for serial production. We are very proud of this achievement, which would not have been possible without the enormous commitment of our employees and the close cooperation with our initial customer. Now we can start serial production as the first high-end IC substrate manufacturer in China.”

Regarding the strategy that AT&S pursues with this plant, Gerstenmayer says: “We want to continue to grow profitably on the basis of high-end technology in the future. The IC substrate technology will make a significant contribution midterm. In the startup phase we expect negative impacts on the results accordingly.”

After many months during which all equipment and hundreds of process steps were set precisely to the new technology and test substrates were produced under serial production conditions, comprehensive tests for the final certification were carried out in the last months.

About 1,300 people are currently working at the IC substrate plant in Chongqing; overall the number will total approx. 1,500 for the two lines. So far, EUR 195.6 million has been invested in tangible fixed assets. By the end of the financial year 2016/17, the investment total for the IC substrate plant will add up to roughly EUR 280 million.

The expected cost associated with the start-up of the plant will start to take effect in the fourth business quarter (1.1. – 31.3.2016) and has been taken into account in the guidance for the financial year 2015/16.

What are IC substrates? IC substrates serve as a connection platform between the semiconductor (chips) and PCBs, they “transmit” the nano-structures of the chip onto the PCB (micrometre structures) and are used in microprocessors for computers, communication, automotive and industrial applications. In comparison to PCBs, IC substrates have much finer structures (approx. 40 micrometres vs. approx. 12 micrometres), and different basic materials as well as different production processes are used. Depending on the application, there is a wide variety of substrate technologies with different assemblies and performance requirements.

Fact & figures on AT&S in Chongqing: