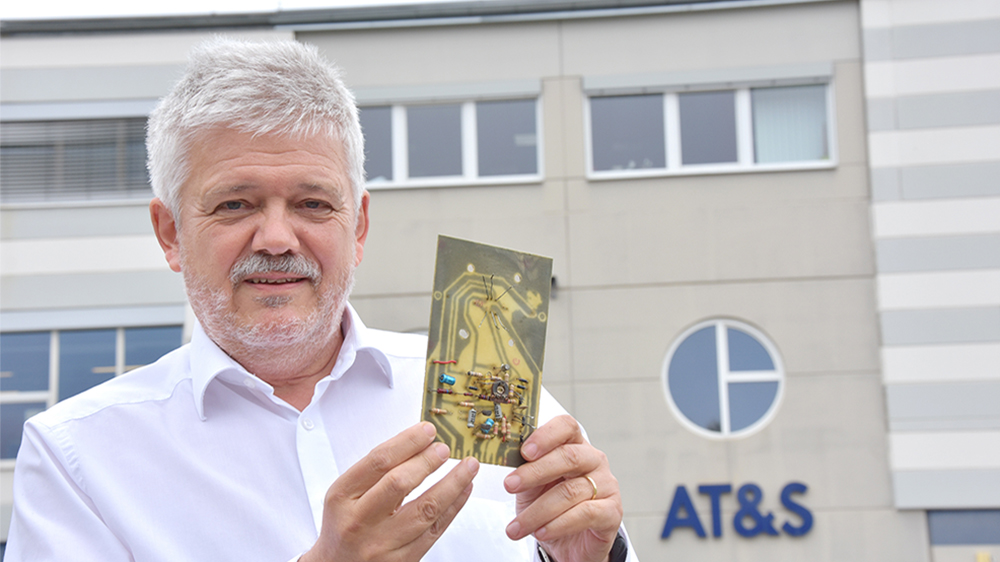 A potent patentee and a star in R&D – Hannes Stahr

The year is 1989. In this year, the classic movie “Back to the Future II” hits theaters, and on November 7th, 1989, New York elects its first African-American mayor. On exactly the same day, AT&S files its first patent application. One of the two inventors on the patent document: Stahr Hannes. The man who is still one of the most active employees we have. One who knows a lot – about past times and coming challenges.

Who developed what with whom and when (within AT&S or with partner companies), dates, names and addresses from AT&S’s beginnings to the present day, loads of technical details, important and seemingly trivial connections – nothing ever seems to get lost in Hannes Stahr’s brain. In a conversation with him, dictaphones or notepads seem like ridiculous attempts to cover up one’s mental deficiencies.

He looks down on no one but many look up to him. He is one of the most active inventors of AT&S and a motivated enthusiast, who is driven by his perpetual curiosity, always looking and suspiciously often finding, not only within his own skull. This has made him one of the most formative figures in R&D. His name on AT&S’s first patent submission in its ultimate corporate constellation is no coincidence.

“Unfortunately, this never became a product. We were much too early and ahead of our time. At that time, AT&S did not produce any rigid-flex printed circuit boards“, recalls Hannes Stahr, known nowadays as Group Manager Technology R&D at AT&S. Such statements about events that took place more than thirty years ago quickly lead outsiders to the aforementioned realization that nothing on Hannes Stahr’s internal hard drive was ever deleted.

His career began very early. The decision to go into electrical engineering had already matured when Hannes Stahr was still in secondary school. At the tender age of twelve, he milled his first circuit board for an amplifier using a drill.

“The HTL would have taken five years, and I just wanted to have the Matura as soon as possible. The music-pedagogical high school only took four years, so I went there.“

With his Matura certificate, he rushed to Graz and began his studies in electrical engineering. He constantly expanded his skills, moving from milling to etching and finally to photo technology. As a student, he converted a washing-up bowl into a foam etcher and constructed his own exposure frame. He financed his living and the last of his academic years with the construction of printed circuit board prototypes. For customers of AT&S, among others, which at that time produced PCB trains with a minimum thickness of 150 μm. Hannes Stahr managed 100μm and less in his student flat.

After graduation, he could have gone anywhere, the offer from AMS (already a renowned company and sister company of AT&S at the time) was on the table – but at AT&S he was offered to help set up the R&D department, which was yet to be founded, and this incentive tipped the scales.

Since then, Hannes Stahr has been researching, developing, trying out, searching for and finding new solutions in Leoben Hinterberg. He tries to pass on to the younger disciples of technology what he considers important: Openness – to all kinds of new ways despite old familiar impasses. He knows the industry, has meanwhile put his stamp on quite a few patents, and is also one of the voting members of the IP review. He knows how long the path of an idea is until it becomes a patent-protected innovation or product – because as mentioned at the beginning – Hannes Stahr does not forget much.

He has now been with AT&S for 33 years, and even if he retires next year, he will be with us for a while yet. Whether AT&S can’t let him go, or vice versa, doesn’t really matter. What does is that curiosity and drive don’t mix well with retirement.