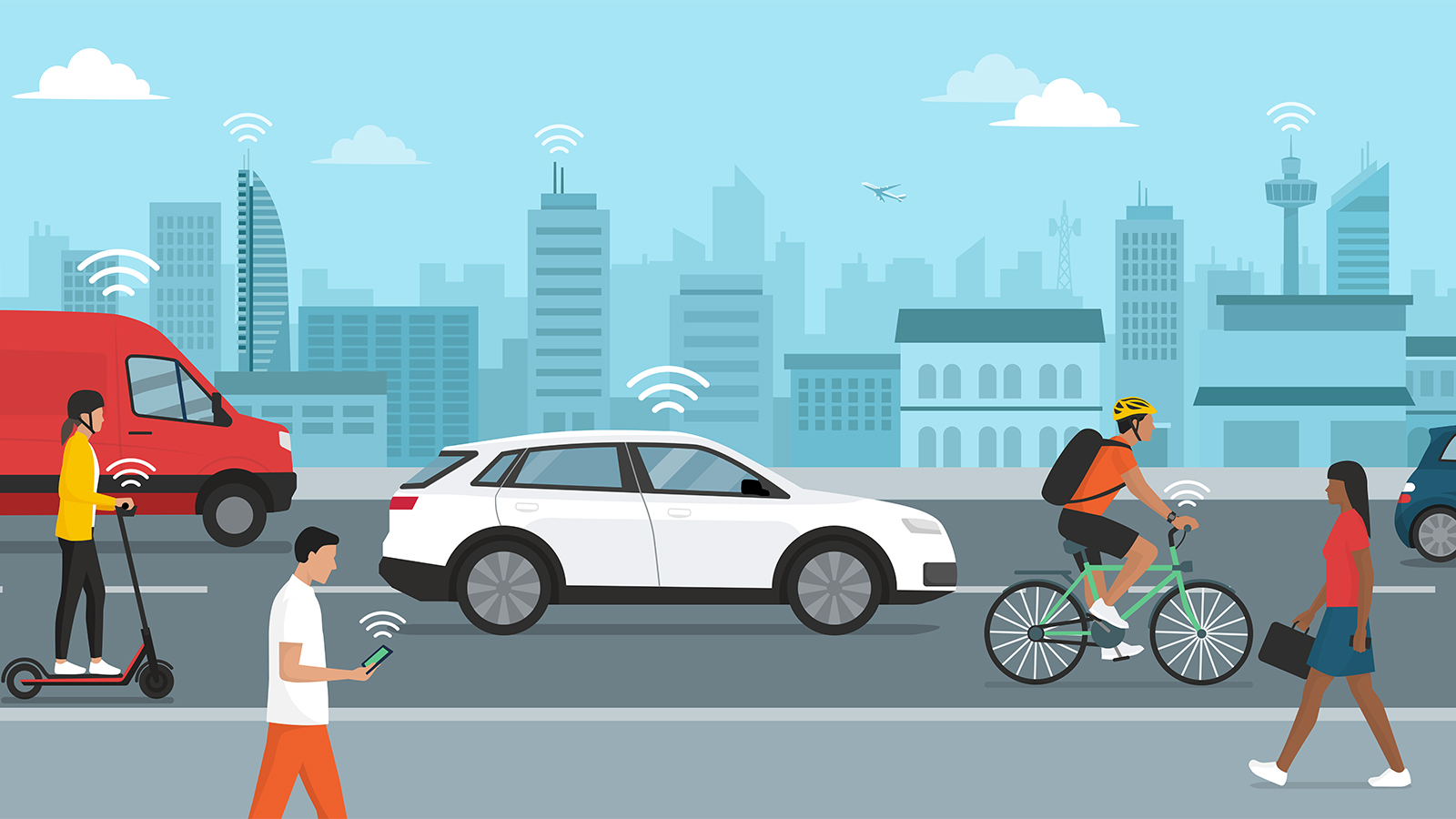 It beeps and flashes in the modern car cockpit. Nevertheless, there is usually a lack of information among the participants of road traffic. A new communication standard, C-V2X, aims to improve the relationships between those involved.

Good relationships are based on sound understanding. In road traffic, however, this is largely absent and leads to dangerous misunderstandings and accidents. There is an increasing number of sensors, warning lights, and signal tones in the car cockpit; for example, when parking, when trucks are reversing, when the car in front is too close, or another vehicle in the adjacent lane is visible in the rear-view mirror. However, the intentions of other road users, possibly outside of one’s field of vision, usually remain a mystery.

The result of poor communication on the road is countless traffic accidents, many with severe consequences for people and equipment. Pedestrians and cyclists, who are much weaker road users than cars, are disproportionately affected by accidents. But a therapy to improve communication in road traffic is in sight.

In just a few years, vehicles should be able to communicate their intentions mutually. The basis for this “Smart Mobility” concept is 5G mobile communications technology. The existing 5G predecessor technology, LTE (4G), will also be used in the early years. 4G and especially 5G allow the rapid exchange of information between vehicles, devices, or the movement of people equipped with them. The concept relies on the “Internet of Things” (IoT), where devices communicate with machines. Automated communication is already used for some aspects of road traffic, for example, sending an emergency message in the event of a crash.

This communication will be significantly expanded over the next few years by a standard called C-V2X (Cellular Vehicle to Many). A car could use its sensors to detect slippery roads and black ice and pass on this information to vehicles behind, which would warn their drivers or even automatically slow down. In another example, a car is approaching a construction site at too high a speed and could endanger the people working there. A warning would be sent to these workers in time. Above all, appropriate communication between road users would significantly balance the power between heavy and fast cars and slower, more vulnerable cyclists and pedestrians.

In the USA, Europe, and China, the first vehicles and traffic facilities are already equipped with C-V2X technology on a trial basis. From 2025, vehicle communication will be standard in cars. However, until such a system leads to “Smart Mobility,” it needs to be relatively widespread, not only in vehicles but also in scooters, cyclists, and pedestrians. This functionality could be integrated into smartphones and smartwatches for pedestrians or cyclists. Mobile phone sensors can already register a crash and trigger an emergency call, as the latest versions of Apple’s iPhone and Apple Watch show.

Currently, different standards for these tasks are still competing. The New York Times reported that Audi is testing both C-V2X and other V2X versions with the Virginia Department of Transportation in 103 cities. One application: If a car overtakes one of the prominent yellow US school buses despite the ban, the driver is warned not to let any children get off. In other examples, the aim is to reduce stress in heavy traffic by providing advanced information about a traffic light. In Europe, with Car2X – a variant of C-V2X – Volkswagen is to enable its cars to exchange information about traffic conditions such as potholes, black ice, or traffic jams ahead. Disadvantage: The system is limited to the manufacturer’s cars.

The 5G Automotive Association industry consortium director, Johannes Springer, describes another application for communicating cars: the transmission of geographically limited traffic rules, known in technical jargon as “geofencing.” An example of geofencing is on motorways in Austria when high levels of air pollutants impose temporary speed limits. Currently, digital traffic signs indicate these limits. In a world of C-V2X communication, they would be transmitted directly to the cockpit, and the car could be slower automatically.

However, the prerequisite for automatic implementation is a controversial aspect of “Smart Mobility”: The step from warning signals to automatic execution by the vehicle without the driver’s involvement. When should a car react autonomously? When should people stay in charge behind the wheel? This will not be controversial in case of emergency braking to prevent a severe accident. In the case of speed limits, on the other hand, disagreements are more likely: There could also be an emergency that subjectively justifies a higher speed.

There is still a long way to go before resolving this question. Because while vehicle manufacturers are already making their cars and bicycles C-V2X-capable from 2025, the authorities in Europe, the USA, and China are still waiting to formulate binding regulations.