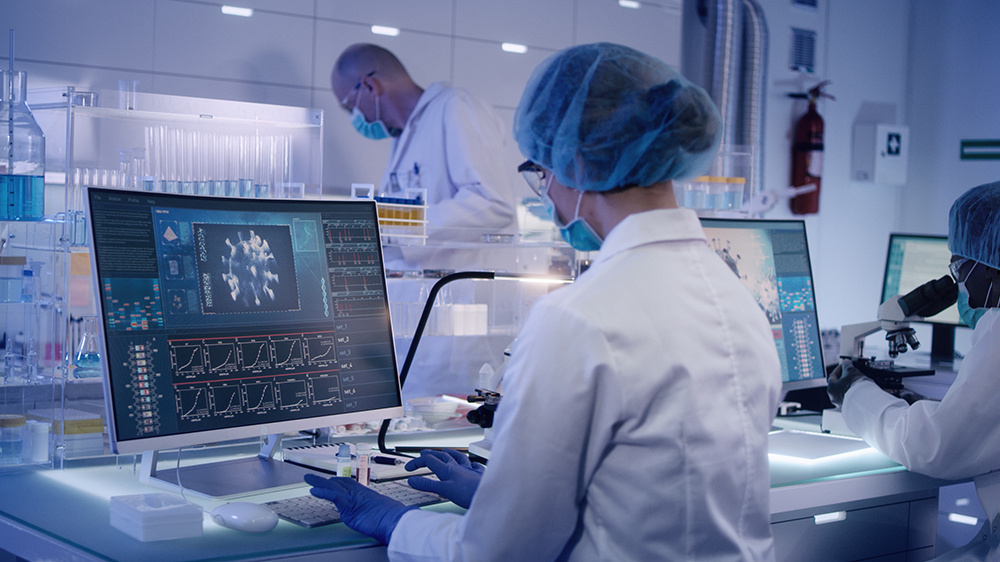 Modern high-performance computers allow researchers to forge new paths in the development of new drugs and vaccines or to model the spread of epidemics. In the analysis of genetic data, whose significance is growing steadily in medical research, supercomputers also play a vital role. Some of the world’s most powerful computers are currently working to find drugs and vaccines against COVID-19. In this effort, scientists rely not only on traditional supercomputers, but also on virtual mainframes which consist of a group of voluntary participants giving part of their available processing power to research.

In the fight against COVID, mainframe computers can provide multiple services for researchers. With sufficient processing power, drug and vaccine data bases can be examined for their efficacy at a molecular level in a model. The US supercomputer “Summit” tested 8,000 active ingredients in simulations to find out which of them could dock onto the typical spikes on the surface of the SARS-Covid-2 virus. This way, it was possible to identify 77 suitable molecules which could potentially prevent the virus from identifying human cells.

Researchers can use supercomputers to perform simulations that identify viral proteins or parts of proteins to which the immune system responds. On this basis, vaccines against the virus can then be developed. The interaction with human cells can be simulated in detail on mainframes allowing scientists to better understand how the virus multiplies in the body. The enormous processing power of supercomputers also comes in handy when analyzing the genome of the virus. When the structure of this genome is decoded in detail, information about the possible origin of the virus can be verified. In addition, the spread of COVID-19 in a population can be modelled on supercomputers, which can support decision-makers in the development of countermeasures.

The development of drugs and vaccines is usually a very lengthy process. It is not uncommon that pharmaceutical companies invest more than a decade and ten-figure sums in the development and market launch of a drug. Using supercomputers, this development can potentially be accelerated significantly and achieved at much lower cost. With supercomputers, medical data bases with known active ingredients can be checked virtually for their efficacy against a virus within a few days. This is where the enormous processing power of these computers comes into play. Most modern high-performance computers are up to a million times faster than a common laptop.

In addition to Summit, a research consortium of US and European institutions is currently also using Europe’s fastest computer, SuperMUC-NG in Germany, to find active ingredients. Japan’s Fugaku supercomputer, which is currently considered the world’s fastest computer, is currently also employed by researchers for the development of drugs against COVID. Such supercomputers are made by IBM, Lenovo, Cray and Intel, among others. AT&S produces substrates which are used to embed the processors of high-performance computers into the systems.

Ever larger computers are not the only way to increase the processing power available to medical researchers. When a large number of volunteers make part of the processing power of their conventional computers or gaming consoles available, it can be turned into a virtual supercomputer, which can also achieve remarkable things. One example of such a project is Folding@Home, whose processing power is unrivaled at peak times. Folding@Home simulates the folding of proteins, which is based on highly complex rules. Since March, Folding@Home has also been analyzing the proteins of the Sars-CoV-2 virus. Whoever wants to support the fight against COVID and can spare some processing power can participate on the website of the project.